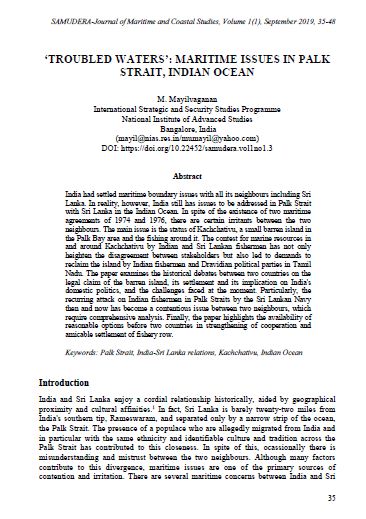 India had settled maritime boundary issues with all its neighbours including Sri Lanka. In reality, however, India still has issues to be addressed in Palk Strait with Sri Lanka in the Indian Ocean. In spite of the existence of two maritime agreements of 1974 and 1976, there are certain irritants between the two neighbours. The main issue is the status of Kachchativu, a small barren island in the Palk Bay area and the fishing around it. The contest for marine resources in and around Kachchativu by Indian and Sri Lankan fishermen has not only  heighten the disagreement between stakeholders but also led to demands to reclaim the island by Indian fishermen and Dravidian political parties in Tamil Nadu. The paper examines the historical debates between two countries on the legal claim of the barren island, its settlement and its implication on India's domestic politics, and the challenges faced at the moment. Particularly, the recurring attack on Indian fishermen in Palk Straits by the Sri Lankan Navy then and now has become a contentious issue between two neighbours, which require comprehensive analysis. Finally, the paper highlights the availability of reasonable options before two countries in strengthening of cooperation and amicable settlement of fishery row.