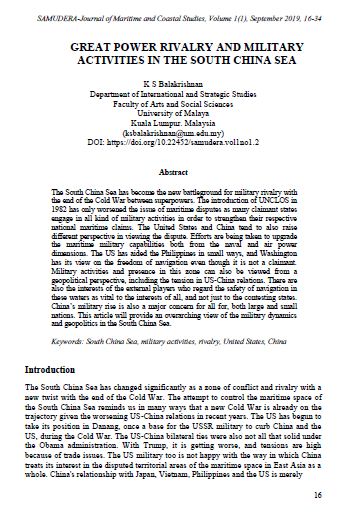 The South China Sea has become the new battleground for military rivalry with the end of the Cold War between superpowers. The introduction of UNCLOS in 1982 has only worsened the issue of maritime disputes as many claimant states engage in all kind of military activities in order to strengthen their respective national maritime claims. The United States and China tend to also raise different perspective in viewing the dispute. Efforts are being taken to upgrade the maritime military capabilities both from the naval and air power dimensions. The US has aided the Philippines in small ways, and Washington has its view on the freedom of navigation even though it is not a claimant. Military activities and presence in this zone can also be viewed from a geopolitical perspective, including the tension in US-China relations. There are also the interests of the external players who regard the safety of navigation in these waters as vital to the interests of all, and not just to the contesting states. China’s military rise is also a major concern for all for, both large and small nations. This article will provide an overarching view of the military dynamics and geopolitics in the South China Sea.