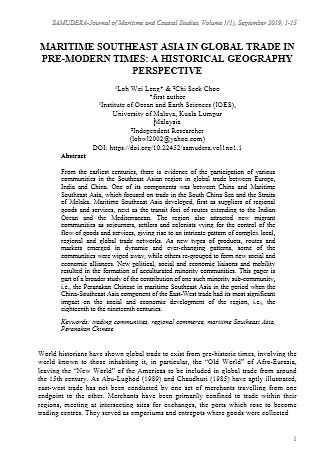 From the earliest centuries, there is evidence of the participation of various communities in the Southeast Asian region in global trade between Europe, India and China. One of its components was between China and Maritime Southeast Asia, which focused on trade in the South China Sea and the Straits of Melaka. Maritime Southeast Asia developed, first as suppliers of regional goods and services, next as the transit foci of routes extending to the Indian Ocean and the Mediterranean. The region also attracted new migrant communities as sojourners, settlers and colonists vying for the control of the flow of goods and services, giving rise to an intricate pattern of complex local, regional and global trade networks. As new types of products, routes and markets emerged in dynamic and ever-changing patterns, some of the communities were wiped away, while others re-grouped to form new social and economic alliances. New political, social and economic liaisons and mobility resulted in the formation of acculturated minority communities. This paper is part of a broader study of the contribution of one such minority sub-community, i.e., the Peranakan Chinese in maritime Southeast Asia in the period when the China-Southeast Asia component of the East-West trade had its most significant impact on the social and economic development of the region, i.e., the eighteenth to the nineteenth centuries.