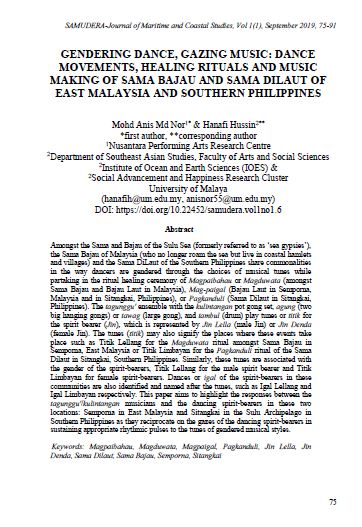 Amongst the Sama and Bajau of the Sulu Sea (formerly referred to as ‘sea gypsies’), the Sama Bajau of Malaysia (who no longer roam the sea but live in coastal hamlets and villages) and the Sama DiLaut of the Southern Philippines share commonalities in the way dancers are gendered through the choices of musical tunes while partaking in the ritual healing ceremony of Magpaibahau or Magduwata (amongst Sama Bajau and Bajau Laut in Malaysia), Mag-paigal (Bajau Laut in Semporna, Malaysia and in Sitangkai, Philippines), or Pagkanduli (Sama Dilaut in Sitangkai, Philippines). The tagunggu' ensemble with the kulintangan pot gong set, agung (two big hanging gongs) or tawag (large gong), and tambul (drum) play tunes or titik for the spirit bearer (Jin), which is represented by Jin Lella (male Jin) or Jin Denda (female Jin). The tunes (titik) may also signify the places where these events take place such as Titik Lellang for the Magduwata ritual amongst Sama Bajau in Semporna, East Malaysia or Titik Limbayan for the Pagkanduli ritual of the Sama Dilaut in Sitangkai, Southern Philippines. Similarly, these tunes are associated with the gender of the spirit-bearers, Titik Lellang for the male spirit bearer and Titik Limbayan for female spirit-bearers. Dances or igal of the spirit-bearers in these communities are also identified and named after the tunes, such as Igal Lellang and Igal Limbayan respectively. This paper aims to highlight the responses between the tagunggu'/kulintangan musicians and the dancing spirit-bearers in these two locations: Semporna in East Malaysia and Sitangkai in the Sulu Archipelago in Southern Philippines as they reciprocate on the gazes of the dancing spirit-bearers in sustaining appropriate rhythmic pulses to the tunes of gendered musical styles.